From the whirring vituperations//wanting chronologies of Joshua Robinson:

All of this in loving, grateful, and ardent memory of Derek Bachman.

Saskatoon—that frigid, clandestine, temperamental spirit of sorts—masquerades paradoxically; caught in the confines of weather that seeps in through the cracks in floorboards and masonries, imbuing its denizens with the silent stutter-step of an enlivening cold-warmth.
It is a city landlocked in the expanse of the prairies, but it is much more than a mere point on the map. For many, it is a burgeoning creative community: lo-fi and humming with the rich analogues of the undercurrent of Canadian artistry. It is a city—as many cities are—with haunting histories, anxious presents, and hopeful futures. But for the musical, artistic, and creative sorts manifesting the city’s virile spirit, Saskatoon is a place of welcoming; of communal warmth overpowering the whirring vituperations of its temperate climates.

The city’s creativities seem forever influenced and inspired by the geographies surrounding them: space defined as place, rooms ripe with weathered canvas, aged musical stirrings, and invigorated poetics. Inasmuch, Saskatoon is the colorful conflagration of the seasons combined into one multi-spirited entity; raising and tempering its creative bodies; the kindling of our kindred fires, both present and enigmatic. Its defining spaces are many, but I’ve chosen to focus our lens on those places and events that exist to incubate and develop the communities for which they exist. And thusly, the calloused skin of an often misunderstood and underappreciated city will be pulled back, briefly, to expose it’s circuitous and humbling personage (February 28, 2014). ______ and then I moved…………. ______

Now, I long for home. For those of you east of me, remember that Saskatoon is the birthplace of what you do and who you are. It is a comfort knowing that music, and its many stakeholders, is and are the result(s) of your variegated efforts.
Saskatoon: forever my spine, my whirling dervish; my root and my reason for leaving. (August 4, 2015).

This is not an exhaustive list. Rather, it is meant to reflect those places which meant the most to me while I was one lucky enough to be living in Saskatoon [September 23, 2015]. 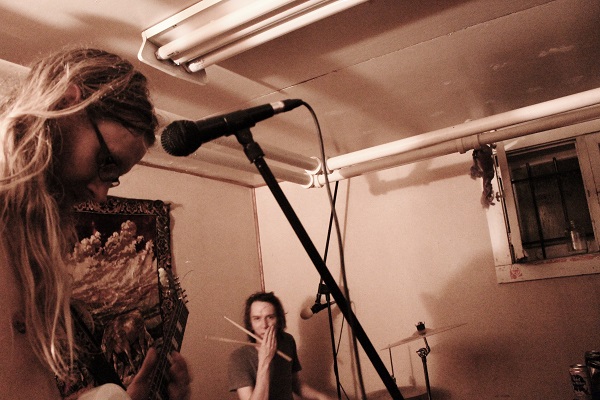 Picture the urban prairies in the throes of winter: scalpel-esque winds; biting cold; ice as dark as the nocturnal spread overhead.
Transplant this generalized imagery.
Suture it onto something more articulable. Something more… perfect.
Rickety wooden steps leading up to a screen door, the steel doorknob worn to translucent silver by frequent turning. Warmth and dim light emanating from the lower level, sneaking up the declining staircase; pushed forcefully by the sound of voices gathered en masse for yet another home concert.
This venue, The Horse Room, equine to the -nth degree, was nothing more than a 2.5 bedroom basement dwelling, complete with Mario Tennis and the fabric-endowed carnate form of The Big Comfy Couch.
Yet, for all it lacked in square footage and capacity to accommodate, housed it did.
This was the abode for musicians touring through Saskatoon.
This was the house that opened its doors to friends, strangers, and friendly strangers. Saskatoon grew, exponentially and musically, by virtue of this one household venue. It smelled of old books, soil-sodden vegetables, and stale beer—commixed to the point of sweet disarray.
Its upper floor was antiquated instruments, furniture, and open windows. The basement was Nardwuar’s wet dream: all grime, gross, and noise. No longer breathing, this pony was put down and its denizens have moved on to other subterranean dwellings.
The Horse Room was the CBGB of Saskatoon-basement venues. It was my home away from home; the venue where I played my first solo show, and—literally—the venue where my best friends lived. It served as a redacted Nirvana, perfectly permanent to those who resided, frequented, and remember; brilliantly and ephemerally nostalgic for those who momentarily stepped inside it’s glorious grime.

RIP, Ponyroom. You’ll always be golden to me. 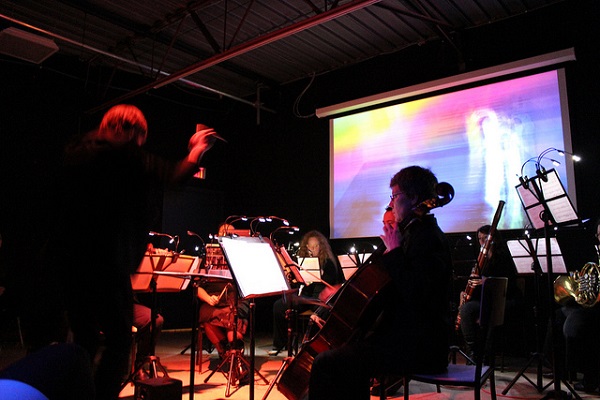 Quiet… Bed sheets hung from rafters, loose fabric rippling in the stagnant non-current of absent air conditioning. Populated by art and artist alike, the venue stirs with the whisperings of voices faint yet profound. Voices searching for something more than themselves in the form of community, safety, acceptance, and expression.

This place is a furnace.

But it doubles, triples—quadruples even—as an accessible venue for industry-grade audio and visual equipment, an accepting live venue space emphasizing the presentation and curation of the work and effort of marginalized communities and individuals, and it stands as a champion for the local arts.

The bottom floor is a tapestry of colours and styles; it is the housing of all things visual, cultural, and meaningful—meaningful in a counter-contemporary sense. It is art made by the people who understand the meaning of art. This work has meaning for the artists who create art and for the audience who benefit from its viewing.

The upper floor: a sprawling open event space. Cement floor and black walls; an expansive abyss until purpose challenges imposed limitations of identity. PAVED Arts supports and curates the most fragile yet poignant expressions of self: those which are rooted in culture, self-expression, identity, and reclamation.

(Vinyl/Local Releases/DVDs/Shows)
Location: 100-220 3rd Avenue South
Contact: Scott Gowen – [email protected]
Was LGBTQIA+friendly, was wheelchair accessible. The record-label embodiment of the record store is still both of these things.

As Saskatoon grows—financially, geographically, and vertically—quiet charms are increasingly hard to come by. Caricatured walkways, silvered slush underfoot; a gradual countdown from the sound of the city to the sound of human-mediated expression looms. The whirring of The Smiths juxtaposed with the pitter-patter of leather-clad and busy feet. The jarring stir of Susan pressed firmly against the long-hanging smog of a city close to the breaking point. The iced South Saskatchewan yielding yet another flooding expulsion of seasonally influenced spates. For a while, this was the only all-ages venue in Saskatoon. More importantly, it was a place where all-ages bands and audiences performed and appreciated said performances. This was the home for many of the city’s younger-than-us performers, opening their throngs to the likes of underaged-and-beyond-their-years Cookin’ With Grandma, while at the same time serving as the inaugural stage for local emergent mainstays Black Tremor and Susan. It served as the home of Saskatoon’s Wyrd Distro Launch Gathering (circa February 2014) and, as a record store, as the go-to purveyor of all materials lo-fi, ambient, punk, and otherwise. Owned by The Moas Scott Gowen, the former record store has transmorphed into Saskatoon’s most prominent micro-independent label, dabbling in shoegaze, garage punk, ambient rock, and the variegated musical genres you can only find under your grandparent’s shower rug or your younger sister’s glue-bound word-stack of Vonnegut publications. What was once a beautiful record store has since become a stellar record label. Congratulations, Beaumont, on continuing to hold artistry above all else, even when the price-of-being becomes inexplicably untenable.

The Moas – Cast and Hold 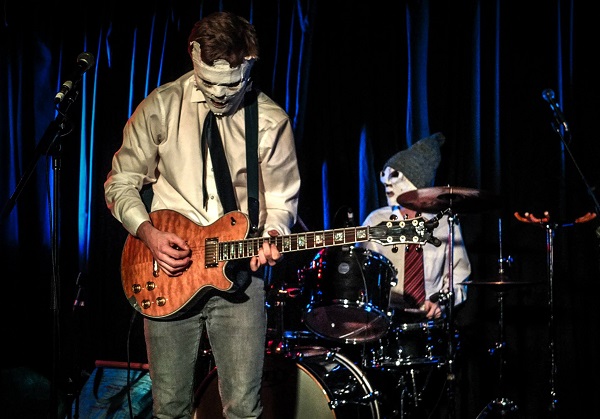 In situ nextdoor to a Subway, Vangelis Tavern is the public and open-staged venue that serves as an extension of—and main stage for—those many acts which graced the bellowing folds of The Horse Room. It was, in my mind now and in actuality then (when I still lived in Saskatoon), the most hospitable stage and venue the city had to offer. It was dingy. It was loud. It was open to all forms of musical fodder. From Michael Feuerstack to Thee Silver Mt. Zion. From Pandas In Japan to Little Criminals. Allow me a moment to wax nostalgic: this was the venue at which I performed my first show as part of a full-bodied band, impromptly named ‘nvr mtns’.
It was, and has been, the furtive performance ground of countless initiatives driving to build ties and influence between local musicians and peoples-of-industry. Kiddy corner (almost) to the former body of Saskatoon’s Lydia’s and just down the street from Amigo’s Cantina, Vangelis is still the warm coal on Broadway Avenue’s cold winters.
It is, for lack of poetically descriptive prowess, the miner’s jewel: brilliance for those who care enough to look for it (‘it’ being music). Somethin’ special brews within the cauldrons of Vangelis Tavern. The name lacks uniform consensus regarding pronunciation, but it holds its own as an absolutely crucial venue for emerging, established, and real Saskatoon-based talent.

Caves – No Birds In The Sky

The Moas – Cast and Hold

Caves – No Birds In The Sky