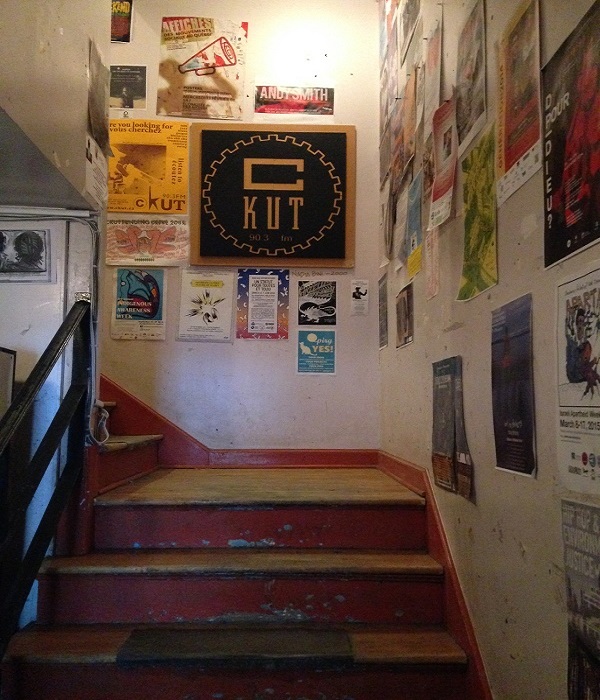 From the drowned-out dronefields of Carol Fraser:

The only way to enter CKUT is through what feels like a back-door, even if it’s on the front of a building, which makes even a first-time visitor feel like they’re in on the magic of creating radio. Located on the ground and first floors of a residential building near McGill University’s campus, CKUT greets you with posters of events past and future, reminding you of your humble place in the great aural universe. With its two production studios and live Master Control Room, as well as offices for seven permanent staff, CKUT is an always buzzing hive, worker bees flying in and out in search of sweet sounding nectar to share with the rest of the world. Broadcasting since 1987 on 90.3 FM, and on a closed-circuit in the Shatner Building for twenty years before that, CKUT continues to push the envelope when it comes to music, news and arts and culture programming. 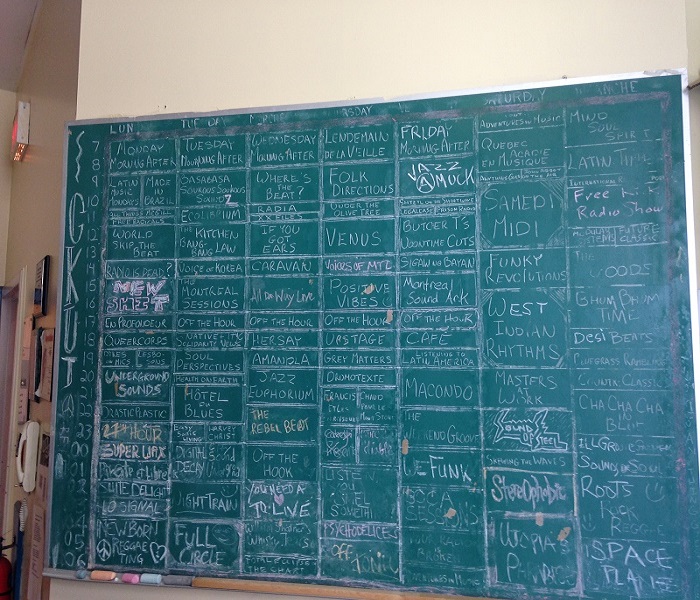 Joni Sadler is CKUT’s Music Department Coordinator and curates CKUT’s New Shit, broadcast Mondays from 3-5 PM. (CKUT is known for being non-hierarchical and collectively run, thus the departments have coordinators, not directors).

CF: What makes CKUT special? JS: It’s a space that really tries to foster experimentation and innovation. There’s always been a sense of adventure and exploration – both in terms of how people host, and how people are encouraged to approach the studio as an instrument. Out of all of the stations I’ve been involved with, I think it’s the most willing to take risks, not only in terms of just programming content, but also trying crazy things – not always sticking with the status quo – and really sticking its neck out in a brave and awesome way.

There are really strong departments – music, arts and culture, news – which is something I haven’t found at a lot of stations I’ve visited or been involved with. It allows for more development within each department. We have a strong news department with a social justice bent – we’re explicitly political, and that’s something we’re proud of. It’s something we try to encourage and foster.

CF: What do you see as CKUT’s relationship to Montreal and the rest of Canada? JS: CKUT is one of the biggest and most established stations in Canada. It has a solid reputation – a deep, rich history – and a lot of momentum and passion. I’d say it’s always been a bit of a trailblazing station – the Homelessness Marathon, for instance, speaks to the ethos that CKUT has, in terms of taking risks and in terms of the causes we want to stand for, whether it’s giving voices to marginalized people, or experimental artists who don’t have anywhere else to expose their music. We always try to be a resource for people behind the scenes, on air, and performers who are just finding their feet, as artists too.That’s really important to us – providing a platform where people can start out and take risks. There’s a lot of respect between musical communities and CKUT, and a lot of collaboration. We love to make things happen in the community and it’s something we always try to do our best at.

JS: CKUT hosted the NCRA conference in 2009. Aaron Levin approached me with a piece of paper that said “I want to start a website.” [Laughs] He had been handing these papers out to other like-minded music directors, and maybe half a dozen of us became contributing writers when it first launched, so it stemmed out of CKUT and campus-community radio in general – in my mind they’re pretty closely connected.

We’ve worked closely with Weird Canada in other capacities – we have a program called If You Got Ears which Weird Canada volunteers curated in October 2014. They brought in a lot of guests and explored a lot of the issues that Weird Canada is focused on – aspects of community, the different segments that go into making art and music in a scene… In a broader sense a lot of our programmers are fans of the website and use it as a resource to find content for their shows. And vice versa… I have friends who find a record in our library or hear it on a show and say “Wow, I want to write about this [for Weird Canada].” I think the inspiration goes both ways. I think it just comes down to people who are passionate about music and interested in supporting things that aren’t heard otherwise, in whatever form is good for them.

CF: Who or what brought you to CKUT? JS: I would totally give props to AJ [a former CKUT Music Dept. Coordinator]. I was working in Ottawa previously and whenever I came to Montreal we kept running into each other. As somebody who had more experience in the music community than I did, she was pretty instrumental in not only bringing me to CKUT but in giving me confidence as a female artist and a female sound person as well, in terms of standing up for yourself and not taking bullshit, and establishing your rights in a scene, and being a super strong head of a department here.

Andy Williams is co-host of The Goods, which celebrates its 13th anniversary this year. The Goods broadcasts every Sunday from 2- 4 PM. “It’s a way to listen to music that you don’t really hear in popular culture, and I’ve always been fascinated by that.”

CF: Was there a specific moment or person that turned you on to CKUT? AW: No, actually…I enrolled at McGill in 1994. I got here in August and one of the first things I did after I unpacked was I went to straight to CKUT to see if I could get involved. I knew people who were doing radio here. We’re all connected in a weird way, people doing radio…I wanted to see if I could fit in and there was a place for me there… At the time I guess there wasn’t really a way for them to check me out online and see if I was capable of doing it, but just by yacking and chewing the fat with them they realized that ‘Oh this guy probably really does know his jazz.’ So I signed up to do my own show, called Solo for Two Voices with Dr. Moore, and we did that for about 5 years. And then I joined a team to do a show called Jazz Euphorium, which is still around, and eventually Scott C. and I started The Goods.

CF: What is the role of CKUT in the art you make and the art you love? AW: It’s given me freedom! It’s fairly easy for me to get my records out but to actually play them on the air – it gives me access to do that, which is really important [as a DJ]. And that’s what we do, that’s why our show is called The Goods. We play stuff from past, present and what we refer to as “future classics.”

CF: Why do people listen to CKUT? Why should they keep listening? AW: You’ll never hear the same old thing – I hear new music all the time on CKUT. It sets a precedent for all the other radio stations out there. I don’t really hear good radio like that elsewhere. For example Funky Revolutions – they talk about politics, race, gender, news, they’ll either play something that pertains to that or something that connects to what’s going on. And I think that’s needed.

Louise Burns, Sales Coordinator. Louise has worked at CKUT for over 20 years. “My personal philosophy right now is ‘Get out of school’”

CF: What’s unique about CKUT? LB: It’s the cast of characters. It’s like what I could consider to be real diversity, which is not just skin tone, you know, it’s about socio-economics, it’s about different backgrounds, different abilities, it’s about music abilities which are really close to people’s identity, you know? It’s about different sexual preferences, sexual identities, the full scale from 1 to 5 and all the middle too, different religions, different ages…but there’s something that is the same as well, which is the kind of concept of alternative voice, which is non-mainstream, non popularity contest… People are there to speak to somebody else. It’s an intimate conversation, and it’s one of self-expression. 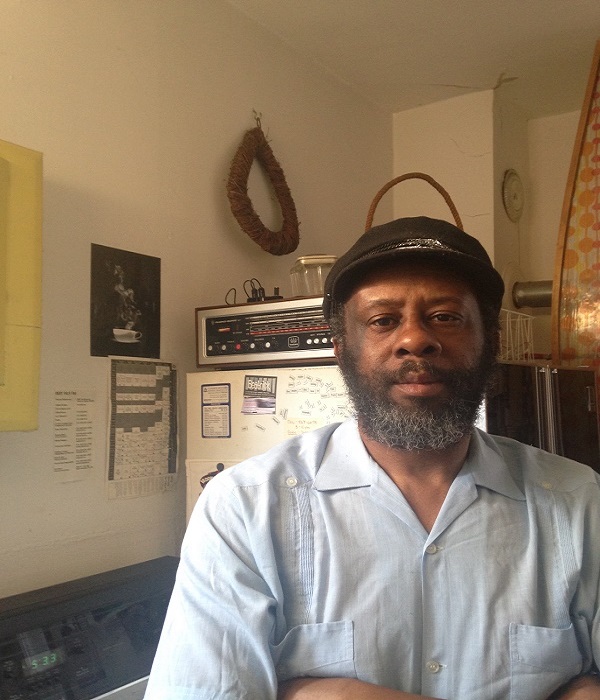 CF: What’s CKUT’s larger role in Montreal and in Canada? LB: An out of school education, for sure… I was just talking to someone about the anti-austerity movement that’s happening right now. We can do that education. Take those five-minute clips about austerity and go on the different music shows, and have a real conversation… have a dialogue. That’s when, for me, it’s super radical and I’ve had a lot of those moments here.. which are hard as hell, but totally worth it! I get listeners calling me and continuing the conversation. It’s a different point of view. That, to me, is the work of community radio. Even in music, because you can have the same kind of conversation.

CF: How’d you end up at CKUT? LB: I had been in bands, and I had been doing stuff at Concordia radio and I was doing film… Once I ended up in the job I’m doing now, I kind of looked around and said “What’s needed?” and I think that was the smartest thing to do, instead of saying “What do I want to get out of this?”

CF: How has the station changed and grown in the time you’ve been here? LB: I would say that in the diversity of communities and in the moving from a university-based group of people, in terms of mentality, in terms of the people who are the participants, not everyone here has had a university education… In this sense, there was a lot of adjustment of the people who were here. Diversity is hard, by the way. There were a lot of growing pains, in terms of confronting that. It’s a challenge. And it’s depressing sometimes. Because you see how much bigotry or instinctual protection people have.

There are so many things we didn’t anticipate. We didn’t anticipate people would stay for 25 years! The programmers especially. I guess I think I didn’t even anticipate I would stay. It’s kind of like, what? I’m still here? It’s part of who I am. It feeds you. It’s in your blood. There’s one programmer who says it’s his therapy. It blows my mind, the programmers who are on from 4-7 AM and they’ll do it forever. They come in the middle of the night, in the middle of winter. Clearly that’s their thing, it’s everything.

No one ever expected that – that they conceived of a radio station and that there would be people for whom the radio station would become their lives, including me. No one ever thought of that.

CF: What is the role of CKUT in terms of the art you make and the art you love? LB: Freedom, for sure. And also – I’ve heard so many art-that-I-love people nodding to the diversity in their work. People sample each other’s work and it becomes a whole new thing. People are exposed to a diversity of sounds. And I guess the lack of formality makes experimentation happen more, you know. The fact that we use our studio as a live venue a lot, that we sit around once a week as a staff and can say to ourselves, “What about if we have a circuit workshop,” or “I have this idea,” that often comes up. If you don’t have a place to speak these ideas they don’t tend to happen… But you have a place to make these ideas here.