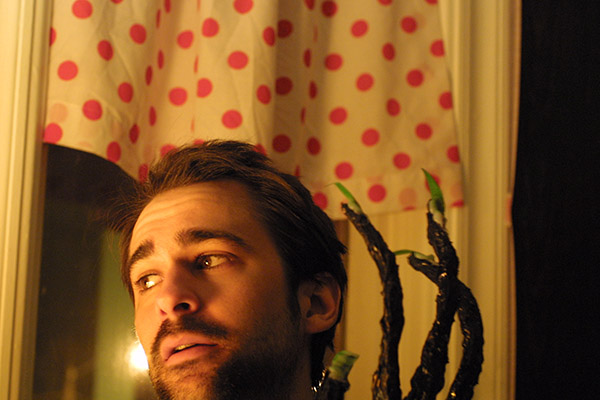 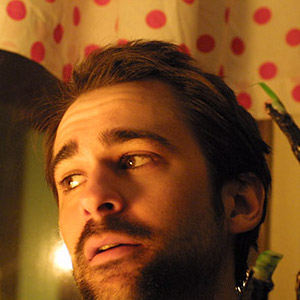 From the pinpointed jazz of Julia Dickens:

Local Ottawa (by way of Victoria) monster-maker Phil Osborne has been oozing and sliming his way into our hearts with his tripped out show posters, psychedelic band projections, and lysergic hand drawn and clay animations. Included in such is the video for “Cemetery House” by Montreal-via-Victoria band/rat pack, Babysitter. Phil also has been known for creating his own brand of DIY capitalism, from the Monster Party Art Gallery in Victoria, to Osborne Oddities, his weekend-only living-room cabinet of curiosities. Phil closed his store somewhat recently, but his wares are still available to purchase on Etsy and brand spanking new Ottawa record shoppe, Gabba Hey. He recently participated in a two month group exhibition at Saw Gallery. 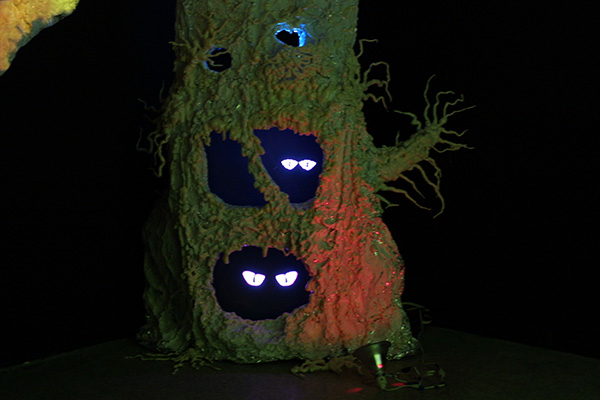 If you could pinpoint a favourite project – even if it’s not the thing you’re most well known for, but were really happy about or jazzed on – does anything stand out?

The thing I’ve done that meant the most to me, and I’ve done it twice in Victoria, [was the] Monster Party Art Gallery. That was something that I had planned when I was 18-19, when I got into the idea of decorating my room, and possibly other places in the future, but I didn’t know where or how, or how a gallery worked, or what a gallery was. I was just like “I’m gonna sketch these out,” these ideas for kinda Peewee’s Playhouse kids show environments, kinda like wacky horror, colourful, 60s – 80s interactive puppet environments. Fast forward 10 years later, when I’m living in Victoria, I was like “fuck that, I’m just gonna do it now.” I had this studio in downtown Victoria surrounded by the acupuncture and yoga studios. It was a pretty big space, and I was living there but like you couldn’t live there, it was above a nightclub. It was really bad; horrible working conditions, but I was like: “I have to do that idea I’ve always had.” So I quit my job and got a business licence and just opened my own gallery. I had, by then, amassed enough of my own work to have a store. I had the pot heads, the screen prints, and the puppets, videos, it was all there.

People would come in and there would be a puppet moving, like, freaking people out, or a little mouse in a mouse hole, peeking, like, I’d be hidden behind the wall, you know… people would come in and they’d be like AH! [Phil makes the sound of a surprised or scared person] That was an idea that meant a lot to me… [to say] “fuck work, I’m just gonna do this”, try to get into the business side of it for the first time. That was the beginning of me trying to sell my art. Before that I didn’t even have an Etsy store. It started with that… and then I moved it to a record store, upstairs, Talk’s Cheap Records. 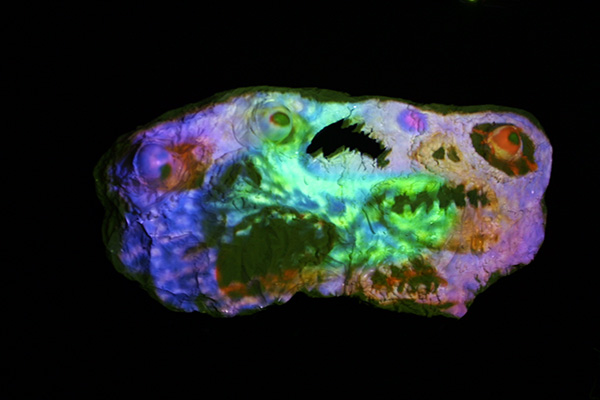 Why don’t you tell me about your recent project at SAW Gallery?

Jason [from SAW Gallery] asked me to do the show. I had done a fundraiser there, and he’s familiar with my stuff from the Saw Youth Program. We didn’t know each other back then. I would have never thought we would be collaborating so closely together. We’re really into the same shit, like, he’s helping me out, he’s sending me to Sudbury to another—

What’s going on in Sudbury?

I don’t know the details, it’s pretty, kinda sketchy. [Last year] they put all the artists in cages? They do this every year. One time they put them in this shitty, seedy hotel, and now it’s an abandoned, decrepit mall…the Galerie de Nouvel Ontario asked like 15 to 20 different Canadian galleries to send them a different artist of their choice, so because I just did that show, SAW Gallery sent me because they like what I do. It’s mostly geared towards installation it sounds like? We’re going to be in vacant spaces that used to be businesses, and there are still businesses in there apparently, but its mostly falling apart, and we’re going to, uh, do our thing in there, like share some spaces or each get a space or something like that. And then people come in and shop and see what you’re doing and there’s going to be an opening. But I don’t think it runs for long. And there’s going to be bands playing for the opening night. 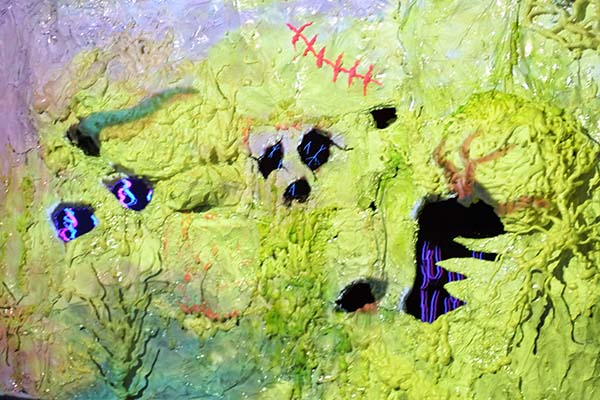 Ok, back to talking about the show at Saw. Can you describe the project to me?

So, it was inspired by the David Hoffos show, if you know him. He had a show at the National Gallery, I went to see it twice. If it was there now I would go every day. One of his pieces was a projection on a piece of cardboard of a woman drinking a coffee in the dark. It looks like a real person, it looks 3D but then you get close and then realize that it’s a projection on layers of cardboard. That gave me some ideas, because I’m really interested in trying to make, this is like a theme in some of my art, is trying to make the cartoon world a real thing, or a hallucination or something that’s fantasy or science fiction, real. I was inspired by that, so what I did was… it’s three projectors, in the dark, three different walls… it’s so visual it’s hard to describe it… You’ll see it move, because it’s animation. Ok, there’ s a few different pieces. There’s a big monster: there’s a tree with holes in it, cartoon eyes that look left and right and pop in and out of the darkness of the tree, this eerie kind of halloween-y tree. And then there’s two planets, just floating there, and then there’s a big wall of… it’s like an organic horror wall with holes in it and a tentacle that comes out with claymation bugs going inside the holes. That’s [an] animation projection on this kind of zitty, bumpy, foam structure. It looks like really intense acne, tumours, veins, really organic. Everything is made out of foam, and there are monitors inside the structures showing animation. So not only is it animation projected on the structure, but the structure itself has animation inside of it that doesn’t interfere. The animation that’s projecting isn’t interfering with what’s on the monitor because it’s light itself. So the monster, for example, is a random monster with random disconnected monster mouths and eyes that are just kind of freaking out kind of like a kids drawing. Inside there’s a hole in the middle of the head and there’re these cracks. I put a monitor inside that, in that hole and there’s an animated cartoon-y brain kinda freaking out. All the animations are on a three minute loop. Sometimes they get darker, the colour gets darker and it changes the mood of the room and everything appears brighter, like the planets become lighter. The planets look like a cartoon-y version of Mars, with volcanos erupting, zits and bubbles forming, everything is changing colour, all the pieces change colour, psychedelic kinda like the stuff I do at rock shows, with an overhead projector and food colouring and olive oil.

There’s no concept, they’re not even meant to be in the same room. It’s kind of just like experiments of this kind of medium that’s new to me that [I realized] I could do a lot with . 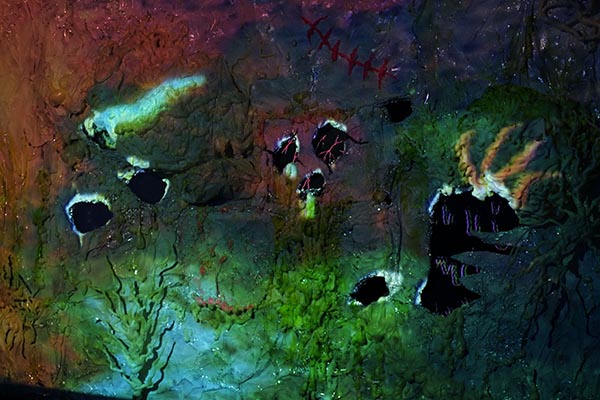 You seem like a pretty process-oriented person: everything is part of or sort of exists in the same world. It feels like your projects kind of bleed into one another. Working on one project will lead into a film you want to make later on, that sort of thing. That’s the impression that I get.

One medium enters another. How it came about was because Jason was like: “you should do an installation,” because nobody else was going to do an installation. He was like: “go nuts… projectors, monitors, we’ll get it for you.” So it was based on what he said, what he randomly threw at me. I was like: “oh yeah, that thing I wanted to do!” or “that would be a good way [to do it], with projections.” I like the idea of the puppets and scaring people, but I’m not going to be there for two months. So how do I do that? Well, with video. So with the monitors and projectors. Jason said he’s seen a lot of shows, but that he couldn’t compare [my installation] to anything else, that it was essentially original. That he’s seen a lot of installations with projections, but he’s never seen one that combined both like that. So there’s something there. And that’s what I want to do with the Sudbury thing … to make it 3D. That’s the thing [with] 3D: if you’re really far away, you’re like: “is that alive?” Like, it’s in the dark and… it’s 3D! Again, it fits with the idea of trying to make the cartoon world a real thing. And also my disappointment with all the drugs I did that never made me hallucinate. Like, I wanna hallucinate with art and I want to make other people hallucinate together, they can all see the same thing. 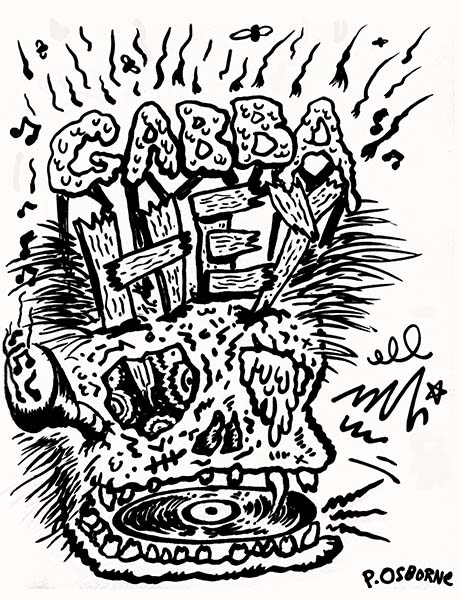 Are you doing any music videos for anyone in the near future?

I’m finishing two now, one for Street Meat, and that’s totally improv, basically it’s like a mixture of a bunch of faces, cartoon-y faces, made up of clay animation parts and line animation parts. Moving, stop motion kinda objects, like a pair of scissors becoming eyes, a face that’s constantly changing, faces made out of many different things. And then another thing for a friend in Victoria, Slim Sandy, who is a rockabilly guy. That one [is all ready].

Alright! Any other projects you want to mention that are coming up? What’s the five year plan? Will you ever get a website?

I will have a website this year I hope, but for now I’m on people’s blogs like this one right now and Youtube and Etsy and Ebay and Facebook. I will always be making toys and animations, but I hope to make at least one short film involving weird alien puppets. 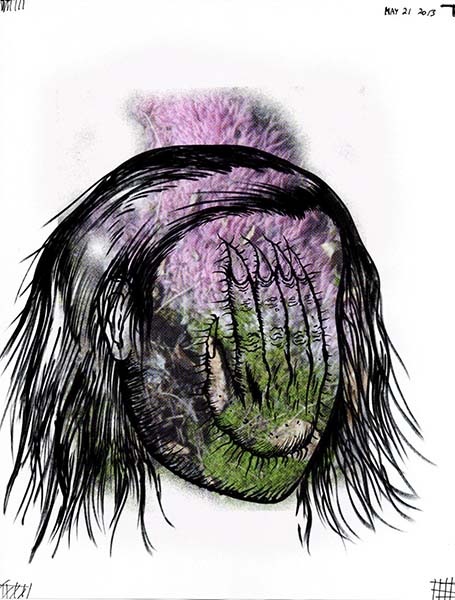