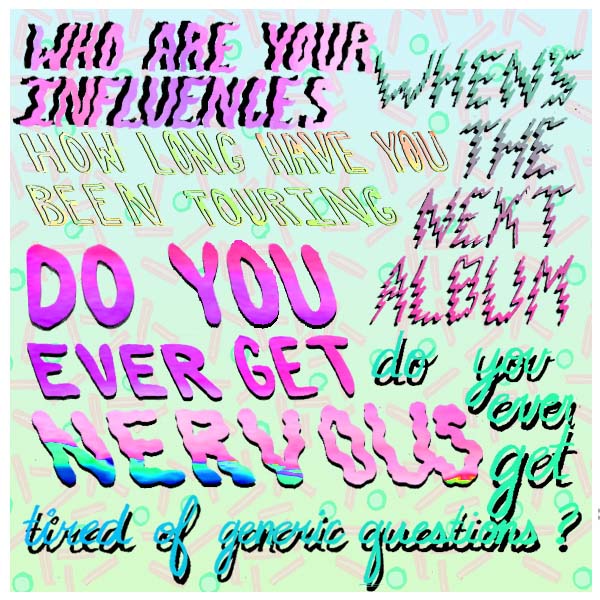 From the weird Halloween cat show of Alison Lang:

Interviewing someone you’ve never met can be one of the scariest parts of covering the music scene. If you are shy/in awe of someone/not good on the phone/not in the mood/tired/hungover/under time constraints, the anticipation before you interview a musician can cause extreme anxiety. Then you actually have to do the thing.

Depending on the mood the musician is in, your interview can either be one of the most satisfying, inspiring conversations ever …or it can be totally horrible and you cringe your way to the end, praying for completion. Here’s how to get the most out of your interviews:

This seems obvious but sometimes – especially when you are on a super-tight deadline – it is easier said than done. Whether you’re interviewing someone for a zine or a newspaper or a blog, your life will be easier if you know as much as you possibly can about the person you’re speaking with:

2. Ease into the conversation.

Sometimes it’s easiest to start things off by getting someone talk about something other than themselves and their work. Did the band/musician just play a cool festival recently? Ask them who they saw and who they loved. Did they eat the most amazing tacos? What a coincidence, you also love tacos. Are they super into cats? Tell them about the weird Halloween cat show you went to that one time. Be on the lookout for weird details that will lead to an interesting conversation– talk about a venue in Canada that you’ve both barfed in. If all else fails, talk about B.A. Johnston. Every musician in Canada has at least one B.A. Johnston story. These are conversational inroads. These are the jewels in your crown. Things to keep in mind:

This is where reading old interviews with the band can help. They may get asked the same questions a lot – “What are your influences?” “What’s it like being an all-female three-piece in a mostly male punk scene?” “Do you miss being at home?” Stuff like that. Sometimes this is unavoidable and you have to ask these questions to get the quotes you need for your story. Sometimes, though, certain questions can be re-phrased or avoided altogether and you can still have a good story.

4. Don’t be afraid to stray away from your prepared questions.

If the conversation is going to an unexpected place, sometimes it’s ok to let it go there – but sometimes it isn’t. It’s important to know when you should intervene and set the interview back on track.

6. Mark your spots in the conversation

You can do this by turning your recorder on and off, or some recorders will let you actually mark when a new question is asked. This will help you a lot when you’re doing the transcribing, the most HATED PART of interviewing.

Sometimes musicians are pissy or sassy or cranky or not very talkative. A lot of them will be talking to you from the road, and being on tour is exhausting and they are probably super tired and hungover or broke, or they might be coming off a bad show, or something else might be buggin’ ’em. They’re human. Don’t take it personally – they don’t know you, and it’s not your fault they’re in a shitty mood. It happens. If the interview seems to be going badly or stalling altogether, just try to get through your questions the best you can and wrap that shit up. If you have time, get an email address and mention you might follow up on a few things later, and they can reply to you when they want. Don’t get snippy or cranky at them though, it won’t help, and it might burn bridges down the road. Plus, you’re the interviewer – you can take the high road.

Unless the musician(s) were total unresponsive dicks, be grateful for your experience. Thank them. Thank the publicist who connected you. Let them know the interview went well (even if it was just ok). They want to know – it’s part of the whole publicity game. Let the band/publicist know when your story is posted.

The interviewee may drop an interesting fact as an aside (maybe the fact that they’re moving, or even that they might be leaving the band). Sometimes it’s good to listen hard to pick up changes in tone, or little hints that the person might want you to ask about something that they’re too shy/coy/anxious to bring out straightaway. Sometimes people need coaxing, and you need to be really listening to them to know when to jump in.

10. Don’t be scared to go smaller/indie/local.

Everyone wants to interview their idols, but the most satisfying interviews are quite often the ones you don’t expect – the road dogs who have an impassioned small-town fanbase, the locals who are just starting out and getting a tiny bit of buzz. These connections might last forever – one good experience can lead to you having a good rapport with a band for their entire career, and maybe they can help you out sometime too. If you put out good vibes during your interview you will invariably get something back in return. That’s why we do this, right?

Interviewing is an amazing skill to develop, and if you approach it with the right preparation and mindset, it can be an immensely enriching experience regardless of the outcome. It will teach you how to be an active listener, and you will also learn insane things about what musicians do and get insights and stories that most people don’t normally have the privilege of hearing. The skills of a good interviewer are also analogous to being a good conversationalist and can help you become a more empathetic, thoughtful human.

Alison Lang is the editor of Broken Pencil, a magazine that covers zine culture and the independent arts. The best interview she ever had was with voice actor Michael Winslow, who conducted half the interview in the voice of Stripe from Gremlins.

file under: How To, ontario.