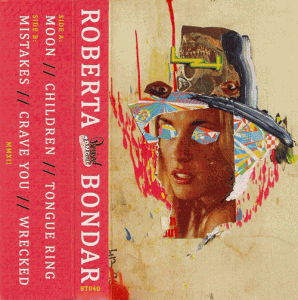 From the outernationalism of Jared Majeski:
Man, space is cool. The sheer limitlessness and expanse makes it rife for uninhibited interpretation and dissection. I’m sure you’ve at least heard the name Roberta Bondar before – probably stuck somewhere in your elementary subconscious. Part of a historical menagerie of noteworthy Canucks, Bondar now shares a moniker with four young Ottawa weirdos. Their debut EP, a cassette released on heavy-feeling Bruised Tongue, is a hyper-modern swig of what Canadian indie may be decades in the future. With a couple tracks eclipsing the seven-minute mark, Roberta Bondar (the band) is retracing the steps of Canada’s original femi-naut. While most of these songs venture deep into blackness (“Tongue Rings”, “Crave You”), there certainly are some more solarized tunes. “Mistakes” stretches over fragments of vogue 90s slackerism while the oretic, half-time happiness of “Wrecked” seems right in the gimbals of satellite-spinning no-wavers. Remember: we’re not alone, so let’s keep twirling, twirling, twirling into oblivion.